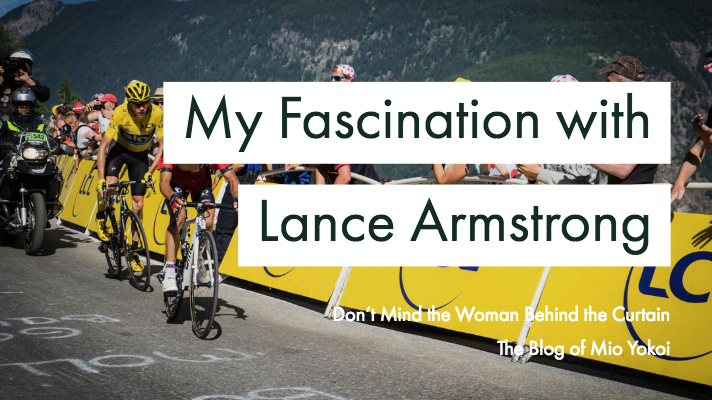 Do you remember Lance Armstrong?

I sure do.  In fact, I was riveted by his seven Tour de France wins after coming back following his recovery from near-fatal testicular cancer.

He also started a foundation and bonafide movement at that time called Live Strong grounded in their mission statement: “to improve the lives of cancer survivors and those affected by cancer”.

And yep, I had one of those yellow bracelets as I have loved ones touched and taken by cancer, and also because it served as a reminder to me that to Live Strong means that there are obstacles great and small in our lives but that it’s still possible to maintain strength throughout.

In fact, looking back, I can credit being inspired by Lance Armstrong’s winning run of the Tour de France for me to participate in a life-changing bike event of my own (more on this at another time), which had a direct impact on me doing the kind of meaningful work I do now.

But if you’re familiar at all with Lance Armstrong, you are also no doubt aware that he doped, that he had denied it for a very long time, that he was outed and had a meteoric fall from grace.

I am writing about him today, not with any intent to create a discussion about the quality of his character.

But many years have passed since he confessed to using performance enhancing drugs and his name and presence in the public eye has more or less become non-existent.

So why am I writing this post, and only my second post to boot, about a former athlete who is no longer able to compete in his chosen sport?

Because I am fascinated by, and dedicated to, overcoming my fears.

Fears are also often accompanied by shame, and shame can lead to all kinds of other gnarly stuff.

And Lance Armstrong, for all that he has been known to have done – good, bad and the ugly – can be considered to be the poster child for overcoming fears and surviving literal situations that many of us can only imagine in our worst nightmares.

He has survived cancer.  He was a high performance professional athlete who has competed over multiple years in one of the world’s most grueling sporting events.

Sure he doped, but at one point, he was one of the most elite athletes in his sport.  I find it really hard to fathom that there’s any drug in the world that could take a mediocre athlete and make them a super athlete… to my knowledge, I don’t think there’s a Captain America-level super serum in existence.

Now, consider this, most of us are ‘armchair quarterbacks’, we watch and sometimes even get pretty emotionally invested in these incredible physical feats by these individuals who have dedicated themselves to not only training their bodies, but their minds to be able to push past pain, discomfort and likely everything within them screaming for it all to cease.

In other words, conquering fear, doubt, and all that scary stuff every one of us feel in our own ways throughout our lives but at very extreme levels.

So let’s think about this: Do you have an example of a time when you had voluntary put yourself in a situation, even sustained situations, where you had to just power through fear to accomplish something that seemed not possible or out of reach?

These professional athletes, and specifically Lance Armstrong, had done it time and time again.

But with all that said, this isn’t why I continue to find Armstrong interesting as an individual.

The thing is, since his use of PEDs and everything that was associated with that was exposed, he has had to do a lot of explaining, and paying up.

Not surprisingly, his reputation as a role model and public figure were obliterated.  There were also lots and lots of law suits.

So to do some quick math here, this is a guy who after experiencing some pretty high highs, has been publicly disgraced, under intense scrutiny and some seriously heavy duty stress for over six years.

And yet, very interestingly… today, he doesn’t appear to be a shell of himself.  He does not hold himself or speak as a man who lives in shame.

No, it doesn’t seem as though he is defiant or in denial of his actions or responsibilities, past or present.  Nor does he seem to be a man who appears to be particularly defensive.  There’s a matter-of-factness about him… and again, he doesn’t appear to be overly defended nor self-righteous nor in any seemingly deep denial even.

He just seems to BE.  You know, in what’s often described as present, mindful… almost Zen kind of way.  Well, kind of.  I mean, it’s not that I see him as a Zen monk nor someone particularly enlightened… I’ll admit, it feels pretty complex and it’s hard to completely nail it down.

But honestly, what I do know is that I find it utterly fascinating.

Let’s try this thought experiment out for a moment: Can you imagine putting yourself in Armstrong’s shoes post PED exposition?

Six years of unrelenting judgements, being stripped of every accomplishment, your financial security and earning ability GONE, AND the government suing you for $100 million dollars.

How do you think you would feel?  How do you imagine it would be for you minute to minute, day to day, month to month?

I am not asking you to think about this from the perspective of making judgements as to whether all that’s happened for him is justified, deserved or whatever. Or whether these are decisions you personally would never have made.

But what I am talking about here is: How do you think you would have handled it all?

Because gosh, like I mentioned earlier, this would rank right up there with the kinds of personal nightmares I live in fear of.  And I have no idea how I’d hold up.  Look, it feels like it’s taking a whole ton of gall to be starting this little ol’ blog that likely no more than a few people will ever read!

With full honesty, how about you?  How do you think it would be for you?

And if considering what it might be like to be in his shoes feels too implausible for you, how do you think it would be for you if your biggest regret/mistake/secret was revealed for everyone to know and dissect?  What then?

This is what I suspect.

The more fears you have faced and experienced, especially actively, consciously or on purpose, the more you would likely be able to tolerate this level of personal pain and stress.

There’s no way that I can have any real insight on this for sure, but I imagine that Armstrong’s past experiences with cancer and his career as an elite pro athlete which forced him to push through other kinds of pains and fears provided him with a level of resilience which supports his ability to live life not holed up in his personal shame as he appears to today.

I would like to make this clear: I am in no way condoning or agreeing with Lance Armstrong’s choices during his cycling career and some of his decisions since.

But I believe that there is a lesson to be learned in any story.

In this case, our fears and the shame which can accompany them can, at times, make or break us or at the very least, feel like they can define us.

The more we are able to look fear in the face with the ability to walk away, even if a little (or a lot) battered and bruised, gives us a dose of resolve against future fear and shame.

In my way, this little blog is a way for me to face one of my fears.

What are you doing to face your fears today?  It’s an integral key to building resilience against shame and truly living strong.